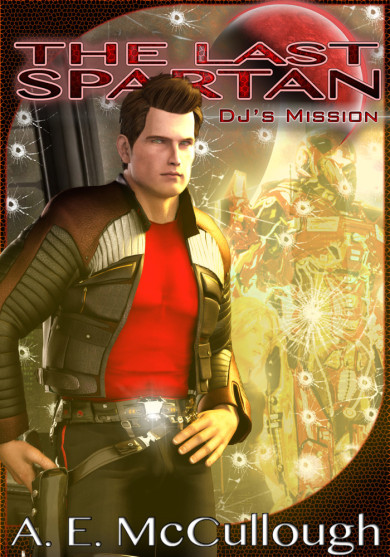 When Iaido 'Achilles' Spartan put the Nemesis into dry-dock for some major repairs, the crew believed they would be in for some much needed downtime. A chance to relax, drink a few brews, play cards and just unwind. Everything was going great until retired UNCF Staff Sgt. Scott 'DJ' DeJarnette gets a visit from an errant robot with a message for help  from his estranged daughter living on Titan.

DJ is hell-bent to head out on his own until Iaido discovers that there's an active warrant for his arrest in the Saturnian System. Evidently, DJ’s ex-wife has married the most powerful man on Titan and has legally adopted his daughter. With these complications, DJ cannot just show up on Titan and collect his daughter, not if he wants to stay out of jail. But Iaido has a plan and sends DJ undercover as the ruthless bounty hunter known as the Red Falcon.

When he arrives on Titan, DJ finds that it won’t be a simple snatch and grab, not with the Saturn Sheriffs watching his every move. As part of his cover story, the Red Falcon is tracking a mark called El Gato, a super spy and thief. However, to complete his true mission DJ must recruit help and make deals with criminals if he wants to rescue his daughter and get out before the authorities discover his true identity.

Through his own sense of personal honor, DJ gains the loyalty of the notorious thief and pirate, Jagger Jax. Hiring a freelance cat burglar to assist with his mission, DJ is ready to take on Titan Avionics and the Saturn Sheriffs. To make things more complicated, the real Red Falcon has learned that he has an imposter operating on Titan. Can DJ rescue his daughter and get out alive?

The Last Spartan: DJ’s Mission is the second book in a Sci Fi adventure novel series following Iaido ‘Achilles’ Spartan and the crew of the Nemesis. Available in print or ebook format.