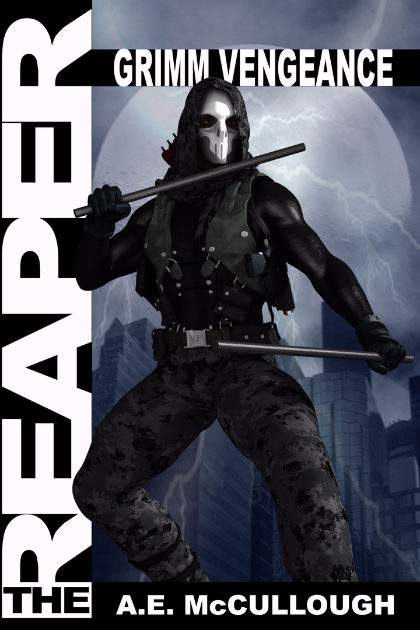 After three tours of duty, former Army Ranger and Delta Force Operator Erik Grimm has finally returned home to his family and the port city of Sanctuary. However, everything is not peaches and cream on the home-front. Erik is struggling with the injuries that forced his retirement and his daughter will barely even talk to him. Perhaps dinner out will help bridge the gap in his family? Turning the corner, they walk into the beginning of a gang war.

Old habits die hard and the former Army Ranger springs into action, taking the fight to the thugs. However, the gang leader known only as The Capo doesn’t like the interference of a would-be hero and takes Erik’s wife hostage. Before the police can arrive to assist, the Grimm family is lying on the pavement bleeding and dying with no sign of the masked villain.

When Erik wakes up six weeks later, he learns the hard truth. His wife is dead. His daughter is in a coma and the man responsible is still on the loose terrorizing the city of Sanctuary. Vowing to avenge his wife’s death, Erik realizes that he must go outside the law if he wants his vengeance. Nonetheless as Edmund Burke once said, ‘The only thing necessary for the triumph of evil is that good men do nothing.’

THE REAPER: Grimm Vengeance is the first novella in this modern-day super-hero vigilante series.

Available in print and ebook format.